Taking the Seaside to Birmingham New Street with the Great Little Trains of Wales and Arriva Trains Wales.

The Great Little Trains of Wales (GLTW), working together with the Community Rail Officers of Wales (CROWS) are delighted to accept an invitation from Network Rail to stage a week-long event in the atrium of the freshly revamped Birmingham New Street station to promote travel into Wales and its coast by train, and to visit the members of the Great Little Trains of Wales who either run close to the sea or on the route to the coast.

Star of the show is a Welsh beach beside a small seaside narrow gauge railway station. In the background, an Arriva Trains Wales service crosses the iconic Barmouth Bridge with views up the Mawddach estuary towards Cader Idris. The Fairbourne Railway is truly a ‘Seaside Railway’ running out from the little village of Fairbourne, along the sand dunes to Barmouth Ferry Station on the edge of the estuary – and this is the view! If the beaches of Cardigan Bay are spectacular, then the views from them looking inland are breath taking. 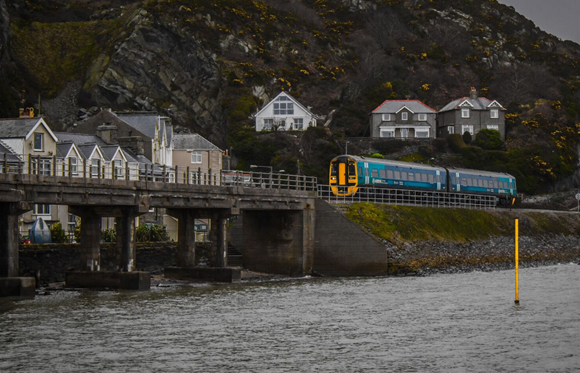 A through service, operated by Arriva Trains Wales, runs from Birmingham New Street into the heart of Mid Wales and on to Machynlleth where it splits; taking the southern side of the Dovey estuary to Aberystwyth or turning north towards Pwllheli, hugging the coast all the way. No less than seven of the eleven Great Little Trains of Wales are within easy reach of stations along this line, called the Cambrian Line – and what better way to arrive than by rail? For example, alight at Fairbourne station and the little train awaits you, its crew eagerly watching for potential travellers. So what better way of promoting the Cambrian Line and the Mid Wales coast than by bringing the seaside and its train right to the heart of the newly refurbished Birmingham New Street station.

Melanie Lawton, the Conwy Valley Railway Community Rail Officer attended the event and featured in the news video said “Passengers travelling from Birmingham Newstreet have a direct train to the North Wales Coast, taking you from the City to the Seaside within 2 hours, it has been a wonderful opportunity to promote North Wales and the Conwy Valley Railway in the City”

We are delighted that this event is part financed by a grant from Visit Wales to encourage and enhance the visitor experience to Wales.

Staff and volunteers from a wide number of organisations will be on hand to inform people as they pass through the station about the beauty of Wales and its coast; its wonderful little steam trains, and the benefits of getting there by rail. There will be a competition and also spot prizes throughout the week.