Fancy a beverage? Check out some of the best micro-breweries in Conwy county

Micro-breweries and their delicious beverages are all the rage right now. Good thing then that Conwy county also boasts a talented pool of entrepreneurs dedicated to the creation of the perfect pint of foaming yeast. Pale, golden, dark and ruby ales all make their presence felt on our list of craft beer goodness. They make the ideal accompaniment to a bowl of Welsh cawl or a packet of pork stratchings.

Before you travel – there’s lots of local ales at TAPPS

TAPPS is a new micropub in Madoc Street, just a few hundred yards away from Llandudno station in the direction of the Great Orme. This fantastic endeavour is a spit-and-sawdust kind of place bursting with tasty Welsh concoctions. If there’s a real ale being produced in North Wales, TAPPS will have it.

You’ll find local favourites on draught and plenty more in bottles with nifty names like Freak Chick (described as a red malt bomb!), Mwsh (Kolsch-style lager) and Welsh Pride (bitter). Non-beer drinker among you? Never fear, they do Prosecco on tap and a fantastic range of local spirits too! 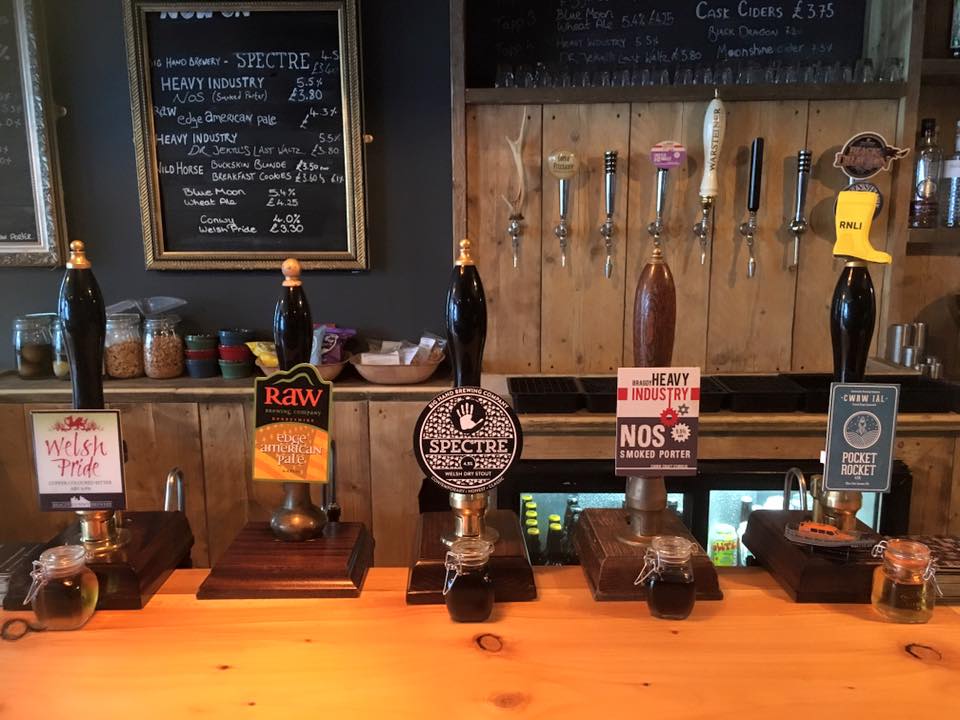 If you fancy visiting the brewery, head for Builder Street in Llandudno. Wild Horse is very close to the Great Orme brewery, which we’ll introduce at our next station stop!

Come on, you need to tear yourself away from TAPPS. The train’s about to leave Llandudno!

All aboard – for a Purple Moose in Conwy

The Albion is a restored pub in Conwy within the town walls – to get to it from the Conwy Valley Railway line you can hop off at Deganwy, walk through the Deganwy Quay development, along the breakwater, over the Conwy River bridge and into town (if you’re feeling lazy, get off at Llandudno Junction instead and cross the bridge).

After that walk you’ll be ready for the array of micro-brewery ales sold here! The Albion is micro-brewery joint venture, owned and run by Porthmadog-based Purple Moose and Conwy (Colwyn Bay), Great Orme (Llandudno) and Bragdy Nant (Llanrwst) breweries.

Purple Moose is 12 years old and produces a core range of four beers together with seasonal specialities, a common approach to brewing among micro-breweries. Core beers include Dark Side of the Moose, Glaslyn’s golden bitter, Madog’s session bitter and Snowdonia Pale ale. More at Purple Moose‘s website.

Great Orme – down the Conwy Valley

Back on the train, it’s just a few stops to Tal-y-Cafn and a pub-restaurant of the same name. Recently rejuvenated and under new ownership, here you’ll find some of Great Orme Brewery‘s greatest hits.

This terrific micro brewery started out on a farm building in the hills above Glan Conwy before moving to larger premises in Builder Street in Llandudno, just behind the railway station.

Many pubs in these parts serve Great Orme ales. So what are they? The core range features Snowdon Craft Lager as one of its best-selling brews, but ale enthusiasts will be swayed by Great Orme bitter, Merlyn dark ale and Welsh Black stout. Celtica is a lovely flavoursome lager, too.

If you want to buy bottles, call at the brewery in Llandudno itself (best to call ahead first). In fact, Great Orme’s warehouse setting has been transformed into a funky live lounge bar, called 3rdSpace, serving up street food, live events and of course, great craft ales. Check the website for opening times (and contact details for the brewery itself).

Leave at Llanrwst for the Nant

Bitter lovers should give Cwrw Coryn a try, and they can at two pubs in Llanrwst – the Eagles Hotel (by the historic bridge) and Pen-y-Bryn on the square. Bragdy Nant‘s website has more information.

Betws-y-Coed is one of Snowdonia’s tourist hot-spots but thankfully the hostelries here continue to promote and sell delicious Welsh food and local craft beers. The Stables, part of The Royal Oak Hotel, is the focal point for visitor refreshment. Good news, then, because here you’ll find Conwy Brewery ales on tap.

So once you’re done in Betws, maybe it’s time to return to Llandudno – or why not carry on to Dolwyddelan and Blaenau Ffestiniog? Many more pubs offering local beers await…