5 Castles to Explore in the Conwy Valley 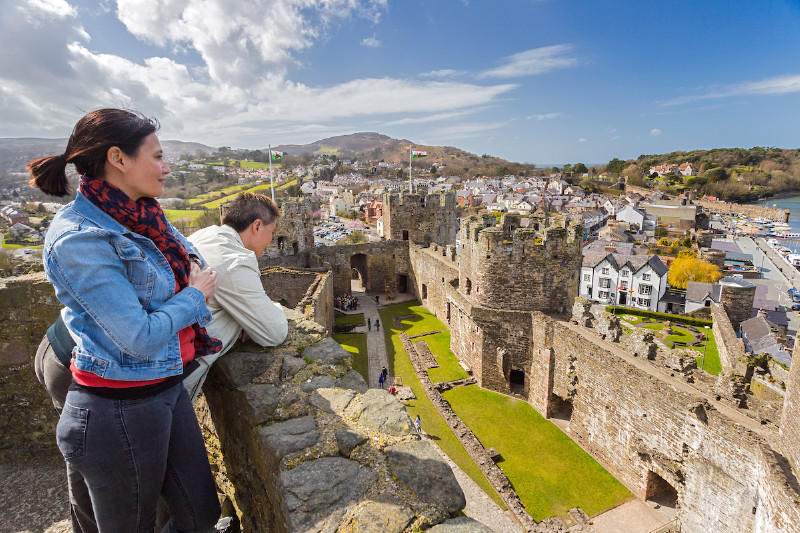 Our region has some of the most well-preserved castles in Europe, and these, combined with the stunning scenery that surrounds them makes for wonderful day out on the Conwy Valley Railway.

Most of the castles people are familiar with form part of Edward I’s infamous ‘Ring of Steel’. These are the massive castles that guard the North Wales coast, from Conwy to Harlech. This menacing and intimidating string of fortresses was one of the biggest medieval building projects in Europe.

However, what many people don’t realise is that along the Conwy Valley line, there are some equally impressive castles just begging to be explored. Each with its own fascinating story to tell, they played a major role in Welsh history.

Deganwy Castle is little more than a few ditches and piles of rubble and masonry today, but it has a history dating back more than 1,000 years.

The twin rocks – called the Vardre – that the castle would have sat upon boast some of the finest views in North Wales. On a clear day you can see for miles around; testament to the site’s strategic importance as a fortress.

The Welsh probably inhabited the site from the 2nd century but the first stone castle was constructed by Norman lord, Robert of Rhuddlan, in 1080. This was destroyed by the Welsh who retook the site at the end of the 12th century.

A new fortress was built by Llewelyn the Great in 1213 but not much of that remains either. Following his death in 1240, his sons took the decision to destroy the castle rather than give it up to King John. When the English arrived, they had to sleep in tents because the demolition was so effective!

The remains you see today are a relic of the castle’s occupation during the reign of Henry III. The site was eventually abandoned completely when Henry’s son, Edward I, chose Conwy as the site of his new castle, owing to its important riverside location. Local legend says that Deganwy Castle stones were used to build Conwy Castle and the town walls.

This iconic stronghold is one of Edward I’s Ring of Steel. It is easily accessed from Llandudno Junction station, being a pleasant 20 minute stroll across the bridge to Conwy town. It’s so famous and so easy to get to, we just had to include it.

As you approach Conwy over the road bridge, the castle quickly dominates the skyline, skulking at the river’s edge like a huge, grey monster. It’s easy to imagine how imposing this structure would have appeared to the native Welsh and how off-putting it was for would-be rebels!

Built by James of St George (Edward I’s master castle-builder), it is one of the best-preserved medieval castles in Britain. And if you think the outside’s impressive, just wait until you see the inside!

Unlike other castles of its era, it is rectangular in shape, probably to take advantage of the lay-of-the-land it was built upon. With two massive barbicans (fortified gateways), eight imposing towers and a great hall, Conwy projects a sense of strength and grandeur upon all who set foot within its walls.

Conwy Castle & Walls is a UNESCO World Heritage Site and the historic town is one of the biggest attractions for visitors to North Wales. You can walk around the ¾ mile walls that encircle Conwy, giving you a unique viewpoint on the town and those who live within. From the battlements, you are treated with stunning views of the sea and mountains as well as fascinating glimpses into the back gardens and alleyways of the residents of Conwy.

The site of Dolwyddelan Castle is said to be the birthplace of Welsh national hero, Llywelyn the Great. This is not quite true. The reputed site of Llewelyn’s birth is the nearby hillfort of Castell Tomen, see if you can make it out from the the tower of Dowyddelan.

Like Dolbadarn in Llanberis, Lllewelyn constructed this simple tower stronghold from local slate and, while indisputably ‘castle’ in design, the interesting choice of building materials makes it unmistakably Welsh.

After Llewelyn’s death, it was added to by Edward I, who repaired it and built a second tower. After Edward’s Ring of Steel was constructed, Dolwyddelan’s strategic importance waned but the castle endured. Down the centuries, another storey and the castle’s distinctive crenellated battlements were added until it came under the stewardship of CADW – the organisation responsible for the preservation of Welsh historic monuments – in the 20th century.

The hike to the top is worth the effort where you will be rewarded with outstanding views of the Lledr Valley.

Although Gwydir is called a castle, it’s actually a fortified manor and a really good example of a Tudor courtyard house. Gwydir sits just outside Llanwrst on the far side of Y Bont Fawr, a pleasant twenty minute stroll on the flat.

Records first make mention of Gwydir in the 14th century and, apart from a couple of spells in the 20th century, it has been continuously occupied ever since.

The current owners bought Gwydir in the 1990s and have carefully restored both the house and the stunning Grade I listed gardens – which stretch across 10 acres. The gardens are home to some ancient cedar trees, including one planted in 1625 to commemorate the wedding of King Charles!

Gwydir has a rich and fascinating history, and boasts connections with royalty and rebels alike. Unsurprisingly, its complex history and long life have earned it the title of ‘most haunted house in Wales’. Visit – even stay – if you dare!

Located a few miles outside Blaneau Ffestiniog, at the end of the Conwy Valley line, this isolated hilltop fortress was once a major centre for the production, not of slate, but iron. It was occupied from the late Iron Age until the arrival of the Romans.

Excavated extensively between 1879-1985, it threw up some really interesting historical remains, including smelting furnaces, stone anvils and hammers, sharpening stones and decorated glass beads. The excavation also showed that this fortified stone enclosure housed smaller structures, including round huts made up of thin wooden stakes, the first of their kind in North Wales.

From the station, it’s a good 30 minute walk up to the remains of Bryn-y-Castell, so sensible footwear should be worn. As one of the lesser known castles on the line, it’s worth a look especially if you’re interested in the ancient history of our region.

A legendary journey on the Conwy Valley Railway

So there you have it. A journey from the coast to the mountains; a journey back in time. If you thought North Wales was all about the ‘big 4’ castles – Conwy, Caernarfon, Harlech and Beaumaris, we hope this has given you cause to think again.