Sundaes, splits and softies: our favourite places for ice cream

Who doesn’t love an ice cream? These days it comes in so many flavours and types – everything from good old Vanilla to Peanut Butter Overload, and from full-on dairy to vegan-friendly. Half the trouble is choosing what flavour to have, while resisting the temptation for an extra scoop!

Whether you like yours ’99’ style with a flake, smothered in sprinkles or drenched in strawberry sauce, North Wales has some outstanding ice-cream for you to try on your next visit.

In our opinion, a delicious ice cream is a treat anytime of the year and all the parlours mentioned in this blog are open year round so you don’t miss out on a tasty treat.

Of course, they’re all within easy reach of the Conwy Valley Railway so you can schedule a pit stop on your next trip… you can thank us later!

Here’s a round-up of the best places to get your frosty fix along the Conwy Valley.

Forte’s is one of the oldest ice cream businesses in North Wales. It’s been family-run for more than 85 years so it’s safe to say these guys really know their ice cream.

They have won several Great Taste Awards for flavours including Classic Vanilla, Blackcurrant Sorbet and Rum & Raisin, but regularly experiment with new combinations such as Rhubard & Custard and Jammie Dodger!

The menu goes well beyond simple cones and tubs, though. There’s a huge choice of waffles, pancakes and other ice-cream related desserts to choose from, plus snacks and drinks.

It’s a great place to sit and watch the world go by and is just a five minute walk from the train station too.

Did you know, Llandudno was the holiday destination of Alice Liddell, the inspiration behind Lewis Carroll’s’ Alice in Wonderland? If you hadn’t already guessed, the Looking Glass is an Alice-inspired ice cream parlour in the heart of the popular seaside resort.

The flavours rotate regularly, but you can expect anything from Apple Pie or Banoffee, to Ferrero Rocher or Eton Mess. The Looking Glass is also famous for its gargantuan desserts with the only limit to what goes on your plate being your imagination!

It regularly runs special events, including late night opening on holidays such as Shrove Tuesday and Bonfire Night, and a Santa’s Grotto at Christmas. 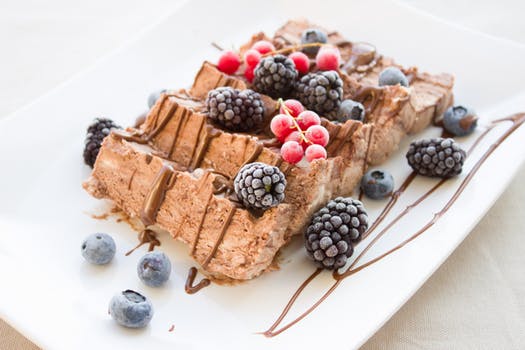 Like Fortes, Parisella’s have been stalwarts of the North Wales ice cream scene for many, many years. With award-winning ice cream produced in their Conwy factory the family supply a host of local hotels, cafes and restaurants, as well as their own parlours.

At Parisella’s parlour in Conwy there’s regularly a queue onto the street in peak season but, trust us when we say, the wait is worth it.

(Top tip – if you can’t wait, they also have a little cabin on the quay selling sweets and ice cream!)

If you don’t get to Conwy you can also try a Parisella’s ice cream at their cafe in Happy Valley in Llandudno. The cafe is old fashioned but really charming, in a beautiful setting overlooking the Pier and LLandudno Bay. It serves a range of light bites and tempting cakes, as well as a selection of their own ice cream.

The Cadwalader story started back in 1927 in the seaside resort of Criccieth in Gwynedd. It was here the family developed their secret recipe Vanilla ice cream – the delicious and unique taste of this classic flavour alone entices customers back year after year!

Today, Cadwalader’s ice cream parlours are a familiar sight across Wales, with outlets ranging from Cardiff to Conwy County. The range of ice cream flavours has expanded well beyond Vanilla (the original and still the best in our opinion) and outlets sell a selection of snacks and hot drinks,including Cadwalder’s specially blended coffee.

Want to know the secret ingredient? According to the original, handwritten secret recipe, to make ice cream just as tasty as Cadwalader’s, you need ‘6lbs of shan’t tell you, and a great deal of love and care’.

Turn left out of the station and Cadwalder’s is just a two minute walk – not far to go to sample it for yourself!

Just because you’ve reached the end of the line, it doesn’t mean it’s the end of your journey. Lots of visitors hop aboard the narrow-gauge Ffestiniog Railway at Blaenau Ffestiniog station and make a scenic trip through the mountains to the coastal resort of Porthmadog. And if you fancy an ice cream fix by the sea, then head for Cariad Gelato.

This family-run business produces traditional Italian-style gelato (a slower churning process and less milk makes gelato denser than ice cream, but it’s close enough for us!) from their base in Dolgellau, using locally-sourced ingredients such as seasonal fruits and local milk.

We’d love to know your favourite places for ice cream in North Wales – just so we can go and try them too! Share your favourites – better still, upload a pic – on Facebook or Twitter.